Our Threads
The Dharma Allium pants first caught my attention with the word Dharma in the title description. Yes, I must confess I was a LOST TV show enthusiast (dharma initiative). So, yes indeed these cozy pants had me at “dharma” however the name has a much deeper meaning then that of a television show. The term Dharma is of central importance in Indian religion/philosophy. It is essentially the notion of upholding the natural order of things. Interpretation of India’s ancient text reveals a divinely instituted natural order of things and
that justice, social harmony and happiness require humans to exist in a manner appropriate to the requirements of that order. In various Indian religions (i.e. Hinduism, Buddhism and Sikhism), living according to ones dharma will move them more rapidly toward personal liberation – nirvana. 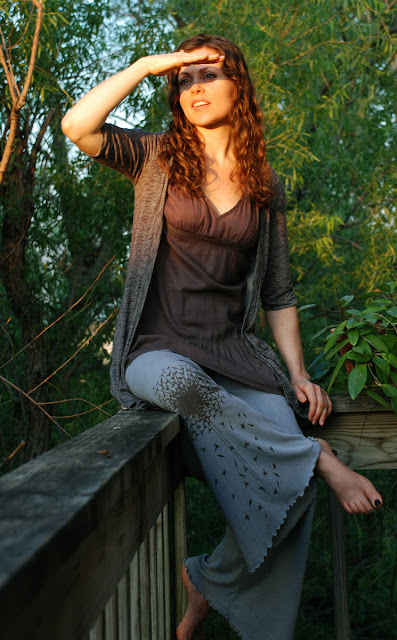 Giving even more meaning to these pants is the sweet Allium flower growing up the right leg. According to the book “Garlic and Other Alliums” by E. Block, the flowers name comes from the Latin word for union, unio or unity. Pretty cool! I will happily carry unio on my pant leg and wish for a seed to blow off into the world and create more unity! 🙂 If that isn’t enough inspiration, I’ve got a hunch the adorable ruffle at the hemline, and the super soft, light, airy organic cotton might be! I especially dig the fold over waist band that allows you to adjust the rise. They are superb for days when I feel like curling up with a good book, but just as great for running a few errands or heading to yoga class. A true go anywhere kind of pant, something I’ve been looking for for a long time. They are super duper comfy wear that will carry you though the day in a whimsical, zenful way. 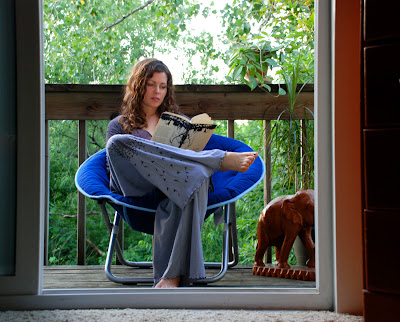 These Dharma darlin’s were also custom made for Soul-Flower by Earth Creations, (a front runner in creating environmentally friendly clothing). I wanted to know more about this company so I did a little research. The Earth Creations story begins with a bike ride. Joy (co founder) went off roading one day and ended up covered in Alabama red dirt. No matter how many times she washed it the color was there to stay. Years later, still intrigued by the strength of that clay, her partner (Martin) saw it’s potential and began experimenting with the clay as a dye for T-shirts. That was 17 years ago and the clothing is still colored using Martins original process. Earth Creations has grown into a full line of organic tees and casual wear (made with sustainable fibers like cotton and hemp and non-PVC ink) dyed in a plethora of colors! They, like Soul-Flower, believe in protecting the earth, giving back to the community and supporting environmental efforts. They are indeed worthy of their tagline, Eco. Pure. Simple.
Be pure…be simple, buds!
Woo

1 Comment on Allium Dharma Pants, More than a Pretty Name