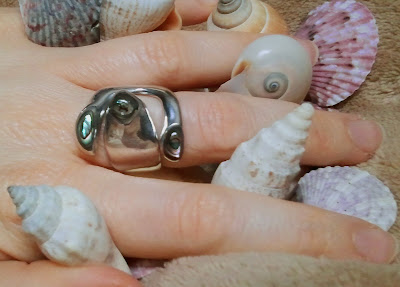 Oh, I just adore this Aphrodite Abalone Ring and its old world feel! In fact, upon opening my little prized box I immediately imagined the ring having been worn by a Greek sea goddess. Now, many moons later it’s been washed to shore still possessing great mystical powers… for which I haven’t discovered yet. 🙂 hehe  I love the ocean and travel there when possible, which isn’t often enough. Seeing this ring on the Soul-flower website reminded me of the many walks I’ve had along the beach. The wrap design of the pewter coils around my finger, representing waves as they fold into one another. They crash to the beach then recede to reveal the treasured shells underneath. 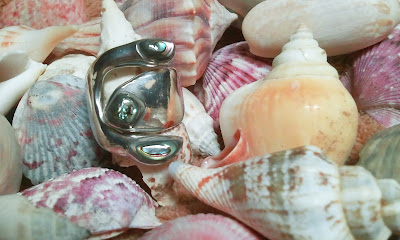 I don’t tend to wear much jewelry but, this ring is different! The creators, (although not sea goddesses), are a group of fair trade female artisans in rural Tecalpulco, Mexico. They, without a doubt have captured the tradition of fine Mexican jewelry beautifully in this piece, making it truly worthy of a great sea goddess. These empowered women make me feel a bit mystical and definitely inspired wearing their work! The fit is smooth and comfortable. I miss my Aphrodite abalone when it’s off, and realized quickly that the thick (somewhat heavy) appearance was quite deceiving because it hugs my finger and fits like a glove. I’d venture to say I might forget I’m wearing it if it weren’t for the fact this ring commands attention (with its striking physique) from everyone it meets! 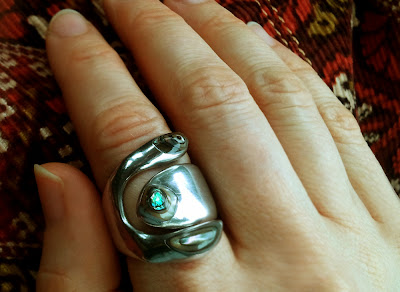